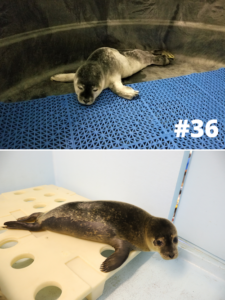 On April 30, 2021, a caring and concerned beach walker found pup #36 sleeping alone on seaweed and was worried he’d been abandoned. Thanks to the report, our team arrived on site shortly after receiving the call. He was nutritionally robust and didn’t appear to have any wounds. Overall, he appeared healthy and strong, with no indication of abandonment.

Moms often leave pups alone while off foraging, and our team opted to give him the opportunity for the best case scenario—to reunite with his mom. When we returned the following morning to check on him, he was gone. But the next day we received another report of him in the same area, and we went back out. Though was still strong, vocal, and active, he was clearly no longer with mom, and the consensus was to collect him for care.

Thankfully, #36 was healthy and strong at admit, having been collected shortly after abandonment—the next best scenario after reuniting with his mom. At 22 pounds, he’s one of the larger pups we admitted this season and was four to five days old. Today, he weighs 39.5 pounds and is almost ready for release!