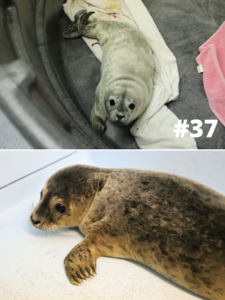 #37 is another April 2021 pup, reported to our hotline on Westport Island. We responded to find him with a full lanugo coat and an umbilicus, sleeping in the water. Though his location limited our ability to examine him, we were amazed to watch this hours-old pup expertly swimming and resting in the cold, rough seas of coastal Maine.

The kind couple who found #37 kept a close eye on him and notified our staff when he eventually came ashore. Venturing back out to re-examine him, we determined that he and his mom had already become separated, and, as with any maternally dependent seal, would not survive without intervention. We collected and admitted him to our center.

Weighing 19 pounds at admit, he was one of the more robust pups we admitted this year! Beginning supportive care before he became too sick from not nursing helped ensure a mostly smooth recovery for #37. Diagnostic tests after his initial stabilization indicated a brewing infection, but antibiotics led to a quick recovery, and we’re now focused on helping him to gain enough weight for release. At 31 pounds, he’s nearing the finish line!