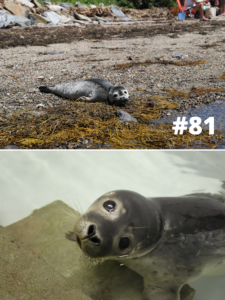 Though patient #81 was also no longer with her mom when we responded to her case, her story is a bit different. She was reported to our hotline on June 6, 2021, in Harpswell, Maine. Based on her behavior, teeth, and nutritional condition, it was evident that she had been weaned and was completely independent at around three- to four-weeks-old.

While she appeared to be in good physical condition, though, her behavior indicated something was not quite right. People had been spotting her for quite some time prior to the report, and she was unafraid of people approaching her on a busy beach—including lawn mowers coming within feet of her! We opted to examine her more closely and perform diagnostics at our center to determine the best course of action.

Weighing in at 22 pounds at admit, she was a bit underweight, but nutrition was not the cause of her stranding. Further evaluation of her behavior and diagnostic test results indicated that she was fighting a viral infection that would require care at our center. She quickly learned to eat fish on her own, showed off her natural instinct to chase live fish, and rapidly responded to antibiotic treatment. She’s now 31 pounds, competing for fish with our other patients, and almost ready to head home!