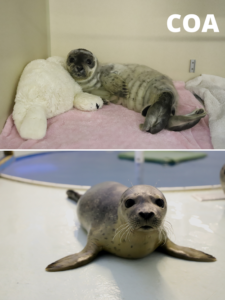 Our stranding network partners at Allied Whale at the College of the Atlantic responded to and rescued COA on April 29, 2021. After their team determined she had been abandoned and would not survive without intervention, they collected and transported her to MMoME’s center. Her admit exam revealed that she, too, had lanugo fur, was dehydrated, and underweight at 16 pounds (healthy pups weigh between 25 and 30 pounds). She also had an infected wound on her head, likely from being pecked by a bird. Her umbilicus helped our vet identify her as only 3-4 days old.

The MMoME team treated this pup with antibiotics, rehydrated her, and slowly transitioned her to formula when she was stable. Her health started improving after a few weeks of around the clock care, and when it did, she became a feisty, vocal little pup that always reminded us when it was almost feeding time!

Once weaned on to fish, COA joined #31 in a big pool and has been working on reaching her release-weight goal of 40-50 pounds. At 30 pounds and gaining almost five more each week (eating 4.5 pounds of fish daily), she’s almost there!