You are here: Home / MMoME in the News / Ice is Nice—for Ice Seals

We know winter is here to stay when the MMoME stranding hotline starts getting reports of ice seals—typically in early January, but this year a bit later, in mid-January. 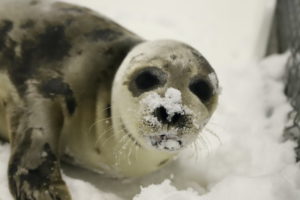 If you caught January’s Friday Night Video, you know the Gulf of Maine sees three species of seals in winter: year-round-resident gray seals, which give birth in January and February on coastal islands off of Maine and Massachusetts; and migratory hooded and harp seals.

In mid-coast to southern Maine, we tend to treat more harp than hooded seals. With a “permanent” home in the Arctic, harp seals typically head south from their summer feeding grounds to breed off the coast of Newfoundland and down into the Gulf of St. Lawrence.

Sea ice is extremely important to harp seals. Not only do they use ice floes for pupping and resting, but the algae that serve as their food sources’ food sources clings to the sea ice—so where there’s ice, there’s often a tasty seal meal.

But while twenty years ago harp seals were rarely spotted as far south as Maine, now the Gulf of Maine has a fairly regular harp seal season that includes sightings of nearly every age group that spend three to four months here (and travel as far south as New Jersey!) before migrating back north in March or April.

This winter’s late arrival of snow has been problematic for some of our seasonal visitors. Ice seals rely on snow and ice for hydration, getting more of their fluid intake from these substrates. In times of little to no snow or ice, MMoME tends to document higher numbers of dehydration cases, and since ice seal season began, MMoME has responded to seven harp and gray seals and 13 strandings overall.

Currently in our care are two yearling harp seals, both great catches by the individuals who reported them—our favorite kind of patient! Our initial assessment indicated that both seals appeared to be headed towards dehydration, which was confirmed by further examination and diagnostics. Happily, both are responding well to treatment and we’re hopeful they will soon be ready for release.

Also in our care is a tiny but mighty gray seal, around seven weeks old and weighing in at just 33 pounds—around half the weight she should be at this age! It’s unlikely that she had eaten on her own after weaning from mom, so our team has been helping her learn to eat fish on her own.

Our third harp seal patient is also around one year of age and is being treated for a case of pneumonia and the four to five pounds of rocks lodged in his stomach. Harp and hooded seals are known to eat rocks and sand as a result of stress from human interaction, when coping with an illness, or when there is little snow for them to eat for hydration.

We’re unsure of what caused this seal to consume so many rocks, but he’ll require surgery to remove them from his stomach. Use of anesthesia on deep-diving animals like seals is risky and complex, and his case is further complicated by our aggressive treatment of the infection in his lungs. Our team is doing its best to maintain his overall condition and keep him comfortable and at ease.

To ensure our rehab ice seals feel happy and at home, we make sure they have access to plenty of the white stuff. Watch clips of rehab patient 007 enjoying the snow as he receives treatment below, or tune in to our YouTube channel to get your fill of precious seal videos!