Harpswell, Maine – Marine Mammals of Maine is proud to announce the opening of a new short-term holding facility for seals, the first of its kind on the East Coast. This facility has just been authorized by NOAA’s Regional Marine Mammal Stranding Response Program to collect and stabilize stranded seals for up to 96 hours before transporting them to other authorized long-term rehabilitation facilities located in Massachusetts and Connecticut.

“This new facility will allow us to give stranded seals immediate care and stabilize them before they are subjected to the stress of an extended transport,” says Lynda Doughty, executive director of Marine Mammals of Maine. “With the extra space and time for treating and evaluating these seals, we will be able to provide better care for each animal.”

Gray and harbor seal populations, once on the brink of extinction in Maine, have rebounded since the comprehensive protection of seals afforded by the Marine Mammal Protection Act in 1972. Gray and harbor seals live along Maine’s coast year round, while Arctic harp and hooded seals frequent Maine waters in the winter months.

Increasing populations have placed additional demands on Marine Mammals of Maine’s staff and resources, especially in the spring months of harbor seal pupping season. The new facility is outfitted with a number of seal holding tanks, critical care units, and an on-site laboratory, which will be supported by staff, an attending veterinarian, seasonal interns, and volunteers.

“Marine Mammals of Maine’s new capability will help increase the survival of sick and injured seals in Maine,” says Mendy Garron, NOAA’s marine mammal stranding coordinator for the Greater Atlantic Region. “This kind of treatment fills a critical gap in our network. With seal pupping season just around the corner, the timing couldn’t be better.” 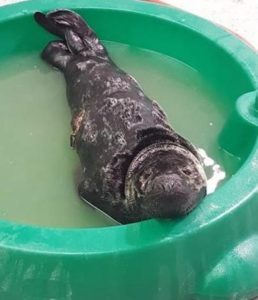 Harbor seals give birth to pups off the coast of Maine beginning in May. Harbor seal pups are very cute, but please remember they are wild animals and should be viewed from a safe distance of at least 150 feet. If you see a seal on the beach, do not touch or attempt to feed it. It is normal for a mother to leave her pup on the beach while she goes in search of food, sometimes for as long as 24 hours.

Call Marine Mammals of Maine‘s hotline if you are concerned about the health of the seal at 800-532-9551.

Marine Mammals of Maine from Lee Arnott on Vimeo.