You are here: Home / MMoME in the News / Do you know the difference between a tortoise and a turtle?

Hint: It relates to water….

Tortoises live most of their time on land, while turtles spend more time in an aquatic environment. As it turns out, the long coast of Maine provides tons of prime habitat for sea turtles!

Our region attracts four of the six species of sea turtles in the U.S., all of which are endangered:  Green, loggerhead, Atlantic ridley, and leatherback. The most common turtles we see in the Gulf of Maine are the hard-shelled Atlantic ridley and the leatherback, which boasts a flexible “shell” consisting of seven ridges across its carapace.

After hatching eggs in warmer southern waters, all four species begin to swim or drift northward to forage. They remain in the Gulf of Maine until early fall, when they migrate south once again. These turtles travel hundreds to thousands of miles a year. The leatherback is one of the most migratory species on Earth, traveling 10,000 miles or more each year!

MMoME fields a handful of sea turtle reports annually, predominantly for leatherback sightings. Sea turtles are ectotherms; they rely on the environment for heat (like snakes) and visit Maine’s coastal waters for feeding in July, August, and September when water temperatures are warmest.

But warming water temperatures due to climate change are impacting these reptiles’ habitat usage. As they start their migration south in the fall, they can experience what’s known as “cold stunning,” when sudden water temperature changes shock their systems, making them lethargic and inactive.

Because of their large size—leatherbacks can reach up to six feet in length!—and because they’re not exactly fleet of (er) flipper, sea turtles are also at risk of boat strikes. And, as with many marine species, ingestion of marine debris and entanglement are unfortunately common occurrences, with monofilament, netting, straws, plastic bags, and other marine debris wrapping around their flippers, necks, and shells. 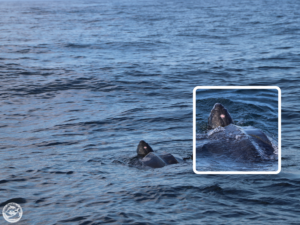 In July, MMoME responded to two distinct cases of entangled leatherback sea turtles in the coastal waters off of southern and midcoast Maine. Fortunately, both involved simple entanglements in fishing gear that—with the help of Maine Marine Patrol—required removal of only a few lines of rope. Although both of these big guys avoided injury, not all are so lucky. One mortality from human-caused trauma is one too many.

As the seasonal population grows, we ask you to put on your citizen scientist hat and keep your eyes peeled for sea turtles.

Please report all sightings—both healthy and in trouble—to the MMoME stranding hotline. We use details of strandings and sightings to learn more about these fascinating and vulnerable sea creatures and how warming ocean temperatures and weather patterns are impacting their habitat use.