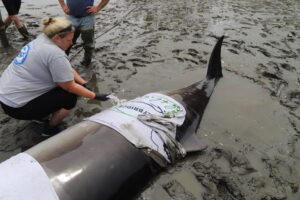 In case you missed the news, MMoME has received calls about two beaked whales on the Maine Coast in the last month, in York and in Phippsburg—only the 3rd and 4th documented in MMoME’s response region in the last 20 years!

Usually found in deep waters offshore and rarely sighted, very little is known about the 22 species of beaked whales. The MMoME team was unable to identify the species of either whale at first glance, but with help from specialists around the world, they were determined to be Blainsville and Sowerby’s beaked whales.

Sadly, the Blainsville beaked whale—a 14-foot, 2,200-pound behemoth compared to the seal pups we usually see—was deceased when the family who discovered her called into the hotline. Initial findings from the necropsy (an autopsy for animals) revealed she had recently given birth to a calf, but there was no obvious cause of death.

Three weeks later, we received the call from Phippsburg about a live stranding of a whale on a mud flat at low tide. Unlike seals, a whale out of water is always a critical and stressful situation, but our team of staff and volunteers found her calm, with no apparent injuries or illnesses. Although refloating and release efforts are often unsuccessful, given her good body condition, the team made the easy—and physically challenging—decision to help her back to her marine habitat. Using stretchers and the tide, we guided her to deeper water, where she was able to right herself and swim out of sight. Sadly, she was later found deceased and was collected and transported (no easy feat!) for a full examination.

We’re still learning about these strandings, what brought these offshore species to the coast of Maine, and their causes of death. Though neither case had a happy ending, the necropsies will offer a unique opportunity to learn more about these poorly understood animals and their habitats. Both skeletons will be transported to the Smithsonian National Museum of Natural History to continue educating visitors for years to come.

The responses each of these cases prompted remind us that our small team is far from alone in caring deeply for the ocean and its inhabitants. We’re so grateful for your calls to our hotline, your social media engagement, and your dedication to our shared goals of documenting, responding to, and educating our neighbors and visitors about ocean conservation!

Follow this link or click on the photo above for video of New England Cable News coverage of this unusual occurrence.